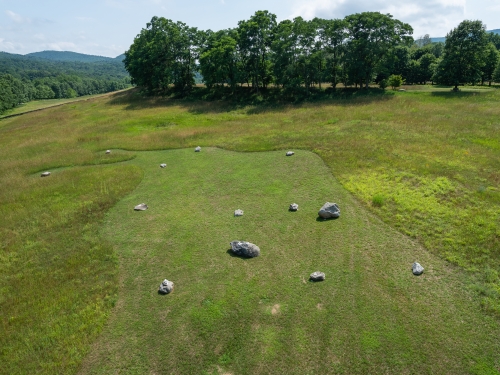 About an hour north of New York City sits Storm King Art Center, an open-air museum home to outdoor sculptures. The 500-acre site includes meadows, woodlands, and a visitor center, all connected by a system of paths winding between sculptures, some as tall as 92 feet. Each year, Storm King invites a mid-career artist to create a piece for its Outlooks program. Tucked away amid towering steel beams and hills blanketed with deciduous trees is Martha Tuttle’s Outlooks project, a stone thinks of Enceladus.

Born in Santa Fe, New Mexico, Tuttle earned her MFA in painting from The Yale School of Art in 2015. Her work has been on display in Chicago, New York, and Antwerp and she has worked in many mediums, creating pieces from human-made materials like textiles, glass, and steel, as well as natural materials like stone. She recently spoke with GlacierHub writer Elza Bouhassira about her latest project and its connections to the region’s glacial history. Her piece is on display at Storm King through November 9.

The following interview has been edited for length and clarity.

GlacierHub: Can you describe a stone that thinks of Enceladus, your project currently on display at Storm King Art Center?

Martha Tuttle: A stone that thinks of Enceladus is an outdoor sculpture consisting of 100 cast glass stones (made from molds of stones gathered from the grounds at Storm King) and 100 carved marble stones. The glass and marble are placed into rock stacks—cairns—on top of boulders strewn throughout an eight-acre field. I’ve loved watching how the growing lichen and the moss on the boulders has become an intrinsic part of the piece, as well as the un-mowed grasses surrounding the work, and the bird and insect sounds.

The larger scope of the project consists of a series of poetic meditations included on a sign in front of the piece, and a poetry and performance series that has taken place virtually throughout the course of the show. Charmaine Lee—a New York-based vocalist—has also made a series of short compositions using recordings taken within the sculpture, accessible on site using the museum’s audio guide program (also through Storm King’s website, and Lee’s bandcamp).

How did you first develop an interest in cairns and how did that unfold?

I like that cairns often refer to the scale of the body (stones used to construct a cairn need to be liftable), drawing a relationship between the human hand and the stone. I also like that cairns are collectively made—in a stone that thinks of Enceladus, I see this collectivity reflected in the correlating performance series.

I think many of us are familiar with cairns as markers of hiking paths. But cairns are also an ancient and varied technology. Historically, they can represent anything from a marker of a food cache, to a burial site, to an entrance to the spirit world.

My interest in weaving and textiles comes from a similar fascination by ancient, yet continued technologies. I’m interested in examples of human ingenuity that inevitably gain conceptual profundity by their consistency, repetition, and how they have furthered the development of human culture, but that still today—20,000, 40,000, a million years later—remain relatable, even quotidian. In the same way that I’ve had countless conversations with people on airplanes etc. about their own textile practices, so many people who knew I was doing this project—art-related and from other circles—have sent me pictures they have taken of cairns. I love that in some small way a lineage is drawn between an iPhone photo text of a cairn, to our ancient stone-stacking ancestors, and maybe in the end even between the stones in the cairns themselves and the minerals that make up our bodies.

What inspired you to feature Saturn’s icy moon Enceladus in the project? It’s fortuitous that Saturn is currently in the night sky, so the light of its moons, including Enceladus, is shining down on your work each night.

It is fortuitous. Just a word on feeling attentive to the light that shines down from the sky— when I was in graduate school, I received a travel grant from the Josef Albers Foundation to study pre-Columbian observatories in Bolivia and Peru. I spent a lot of time of course looking up at the night sky, and surprisingly I’ve never felt so homesick in my entire life. Looking up at a hemisphere totally different than the one I had grown up with, I had this deep, almost physical longing for familiarity, for my home. It’s then I started to believe that we are constantly picking up what is in the sky and when, just as we absorb the landscape around us and our earthly surroundings.

We speak about the construction of ancient observatories or aligned cities (Chaco Canyon being an example) as such an extraordinary expressions of observational and notational skill, and of course they are. But I think—even in the densest cities—we are probably observing far more of how the heavens move around us than we might be consciously aware of.

The interest in Enceladus, the moon, started from thinking of the glass surface of the stones I was making and their reflectivity. Enceladus is thought of as the most reflective surface in our solar system, as it is covered in ice. But I also love that in Greek mythology, Enceladus (a giant), is the child of Uranus (the sky), and Gaia (the earth). The scatter of the reflective stones to me has a relationship to the scatter of stars, and I wanted to draw a circuitous relationship between the earthliness of stones, and the vastness of the cosmos.

I’ve read that your childhood in New Mexico has influenced many of your works. Can you tell me about any childhood experiences of winter snow on peaks in New Mexico?

What comes to mind is hiking with my family’s dogs after a snowstorm, and their ability to navigate changes in the terrain even when the land was covered by a few feet of snow. The snow in New Mexico can get really deep, and sometimes it’s unclear where there’s a drop or a ledge. We would follow the dogs, and they would keep us safe. When I think of snow in the mountains in my childhood, I think of having this deep trust and relationship with a non-human being.

Also, your question makes me think about how the day after a snowstorm in the west the sun is so strong that everything is glittering. When I was a child, I thought that these crystalline sparkles were millions of fairies.

You completed your undergraduate degree at Bard College, just over 60 miles north of Storm King in the Hudson Valley. Did the time you spent there foster a connection with Hudson Valley landforms for you? Do any experiences or visits to places stand out or was it a more gradual development?

I think definitely, it is so beautiful there. I remember most strongly spending time across the river near Kaaterskill Falls, and other swimming holes in the area.

More specifically, I spent a lot of time in Germantown, NY one winter a few years ago. It was particularly cold. A combination between the dawn light and the ice floes left a strong impression on me.

How did the idea to create glass rock casts come to you? How do you feel the presence of the casts contributes to the overall piece?

I’ve been casting stones from other materials for a few years, mostly metal. I woke up one morning and had a strong instinct to learn how to make them out of glass, and emailed Urban Glass in Brooklyn, and they taught me how. In the next week or so, I was asked to propose the project to Storm King as part of their Outlooks series.

The glass stones came more as an intuition. But as I went forward, a lot of meaning emerged. I love that the casting process allows me to focus on the surface of the stones, the molds picking up impressions of lichen, or small cracks on the surface. It’s a way of remembering that each stone represents an extraordinary relationship and witness to time.

As you conceived and constructed this work, what influence, if any, did you feel from Storm King’s glacially shaped landscape?

When I first started working on the piece, I spent a lot [of time] with both the geologic and glacial history of the Hudson Valley. It was so beautiful to learn about, for example, the glacial lakes bursting through the Verrazzano Narrows to reach the sea, and to understand that when at Storm King, one is within the memory of this glacial history. This never left my mind while making and installing A stone that thinks of Enceladus.

Similar to drawing a relationship between a cast glass stone and a distant moon, I often explore in my work how one feels intimacy with vastness. Trying to feel a sense of connection to the deep time of the Hudson River Valley—even imagining watching the movement of glaciers in real time—was really important to me, and to the formation and placement of the sculpture.

I see this kind of imagining practice as ultimately an ecological one—hopefully a facilitator of empathy with what we consider as outside of our immediately relatable timeframe. I believe there is a direct connection with how much care we give to our surrounding ecosystems, and how much we feel an emotional connection to and a lineage with the non-human (whether that is a plant or a glacier). I think that poetic, emotional, and spiritual ecologies are critical alongside political and legislative ones as a way to make our symbiosis felt, as well as intellectually known.

Lastly—and this is more general—can anyone who’s interested in sculpture not get totally psyched by thinking of a glacier? The carving out of a fjord, the smoothing of a mountain, the dropping off of an erratic. Everywhere in a glacially shaped earth there is a narrative, and I think it just becomes a wonderful, engaging joy to be able to learn the language and read the story left by these master shapers of space.

Link to the Earth Institute