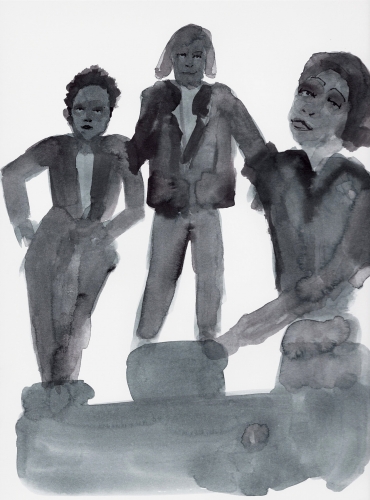 Asked to paint a female figure she'd commemorate with a statue, the Los Angeles-based artist February James, 43, chose Augusta Savage (1892-1962), an American sculptor during the Harlem Renaissance. Savage is "making a statue of Stacey Abrams and Kamala Harris," James said, noting that Savage's 1939 sculpture for the World's Fair was destroyed.  February James

Why Are There So Few Monuments That Successfully Depict Women?
There’s still very little thought paid to how women are represented — as bodies and as selves.

IN HER 1792 TRACT “A Vindication of the Rights of Woman,” Mary Wollstonecraft argued that men and women should be educated together as equals, “for only by the jostlings of equality can we form a just opinion of ourselves.” Wollstonecraft was that rare thing in 18th-century England: a female public intellectual, one who argued passionately for women’s place in society. More than two centuries later, men and women jostle in all matters of public life, and yet their likenesses in the public space do not. In the United Kingdom, by one estimate, only some 3 percent of public statues are of nonroyal women. The number is thought to be about 7 percent in the United States, but in New York City, up until last summer, there were famously only five statues of historic women: the Catholic saint Joan of Arc, the former Israeli prime minister Golda Meir, the Modernist writer Gertrude Stein, the former first lady Eleanor Roosevelt and the abolitionist Harriet Tubman. If humankind vanished tomorrow and aliens arrived from another galaxy, they wouldn’t be faulted for believing that the whole of human history was composed of men on horseback.

So it was with a great deal of anticipation that a statue of Wollstonecraft, following a decade-long fund-raising effort, was unveiled in a north London park last fall. As it turned out, the statue wasn’t of Wollstonecraft but rather for her, an “Everywoman,” the commissioning committee wrote, “who challenges the traditional statue form by elevating an idea, personifying the spirit, rather than depicting the individual.” Made of silvered bronze, it featured an abstract, wavelike base of varying textures, topped with a small nude figurine of a woman. The outcry was immediate: The alloyed genericness of the figurine and its tiny blank face had an unfortunate cyborglike quality, reminding some of the Terminator T-1000, or the hood ornament on a Rolls-Royce. Others had aesthetic quibbles about the decision to present a feminist Everywoman as so nude and lithe — and so lavishly endowed with pubic hair. (One evening, someone placed a knit sweater next to her, as though she might be chilly.)

Eventually, the critical voices will no doubt subside and the collective eye will adjust. And yet I wonder: Why couldn’t a statue of Wollstonecraft, the individual woman, be seen as universally inspiring and iconic? It was hard not to view the monument as a victim of its own good intentions, inadvertently becoming yet another example of a female form as emblem of an abstract idea, such as the Statue of Liberty or Marianne, a symbol of the French Republic, or any number of nameless angels, goddesses or graces on memorials. We’ve no lack of statues of women, really; it’s just that too many of the ones we have are devoid of personhood.

In the hierarchy of representational crimes, though, Wollstonecraft’s memorial merely ranks as a missed opportunity, arriving, as it does, in the wake of such statuary folly as 2017’s “Fearless Girl,” Wall Street’s corporate-sponsored, ponytailed version of female empowerment or, most recently, “Medusa With the Head of Perseus,” Luciano Garbati’s seven-foot-tall offering, which currently stands across New York’s Centre Street from a county criminal courthouse — yet another random naked lady; yet another mangled lesson in feminism.

WHY, IN AN era in which statues are tumbling down, do we need to address the gender gap in such representation at all? Portrait sculpture’s heyday — the 18th and 19th centuries, when our heroes were presidents, intellectuals, explorers, military figures and captains of industry — is long past. Even back when they were actually in fashion, such statues were embarrassing in their weighty self-regard: Lord Byron wrote in 1821 that a portrait sculpture (specifically a portrait bust) “smacks something of a hankering for public fame rather than private remembrance.”

Of course, women’s role in society has vastly changed since then and, as a culture, we’ve moved away from portrait sculpture and toward other forms of art. But in the theater of the public imagination, representation still matters. Envisioning one’s future is, of course, an act of imagination, based on our education and our sense of the possible, affirmed by our families and cultures. “Taught from infancy that beauty is woman’s scepter, the mind shapes itself to the body, and roaming ’round its gilt cage, only seeks to adorn its prison,” Wollstonecraft argued in her push for educating girls. Yet even today, groundbreaking women of the past tend to be framed by their private lives (their vulnerabilities, their fragilities, to whom they were married) as much as their accomplishments. I’ve often darkly wondered what it would be like if we actually made statues of famous women as they tend to be collectively remembered: Virginia Woolf in her overcoat, the pockets filled with stones; Sylvia Plath with her head in the oven.

It so happens that there is a new, full-size statue of Woolf in the works intended for a spot along the Thames in Richmond, London, near where the author lived and worked, in which she will be depicted sitting on a bench, as though resting after one of her walks, an activity she fondly described in her 1927 essay “Street Haunting.” The sculpture — more straightforward, fully clothed, striving for realism — is startling only for one reason: Woolf’s likeness is gently smiling. (One might, at a dozen paces, mistake her for Mary Poppins.) In any event, in Woolf’s appearance there is something to be glad about, as there is in last summer’s arrival of the first nonfictional female figures to ever reside in New York’s Central Park: a statue of the pioneering suffragists Sojourner Truth, Susan B. Anthony and Elizabeth Cady Stanton collaborating at a table — who joined Mother Goose, Alice in Wonderland, 23 statues of respected men and Balto the dog.

THESE NEW STATUES are also arriving in the midst of a larger and significant global reckoning about historical authority and representation. It felt like a turning point last summer when, in Bristol, England, a statue of the 17th-century slaver Edward Colston was tossed in the harbor and temporarily replaced by Marc Quinn’s statue of the Black Lives Matter protester Jen Reid, her fist raised triumphantly in the air. The same month, the poet Caroline Randall Williams published her searing essay “You Want a Confederate Monument? My Body Is a Confederate Monument,” which begins, “I have rape-colored skin.” In November, Simone Leigh’s iconic “Brick House” was installed on the University of Pennsylvania campus in Philadelphia (another edition is also on display on the High Line in New York), a 16-foot cast-bronze sculpture featuring a Black woman’s head atop a large, encompassing base — an especially eloquent piece in a year in which women of color have figured prominently in progressive politics. As a legal battle continues over the future of a prominent 12-ton statue of Robert E. Lee in Richmond, Va., the former capital of the Confederacy, the site has become a peaceful daytime gathering place, “activated,” as the artist Catherine Opie recently put it for this magazine, with new meaning. Artists projected images of Breonna Taylor and George Floyd on it; activists painted names of other victims of police violence on its base. Such statues are compelling onlookers to consider what is essential history, to reconsider one’s position within the arc of the moral universe.

Last summer, while I was visiting a friend in Bronzeville, a neighborhood on Chicago’s South Side, we decided to take a walk together, passing by Margot McMahon’s sculpture of the poet Gwendolyn Brooks. Installed in 2018, it is the first outdoor portrait sculpture of a Black woman in the city. As we chatted, my 4-year-old daughter examined the steppingstones inscribed with Brooks’s words, quotations from her Pulitzer Prize-winning 1949 book, “Annie Allen,” before stopping to scrutinize her bespectacled face. “Who is Gwendolyn Brooks?” she wanted to know. "A great poet," we told her. "An important woman."

Link to the New York Times